For his Master of Fine Arts thesis project, Gordon Gilkey created "A Series of Etchings Showing Construction Progress of the University of Oregon Library."  This thesis (entitled here as Building the Library) documents the construction of the historic Knight Library with thirty etchings. 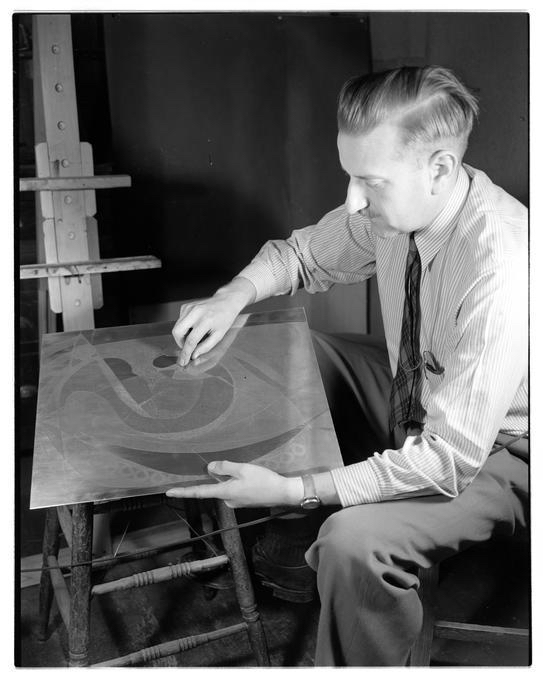 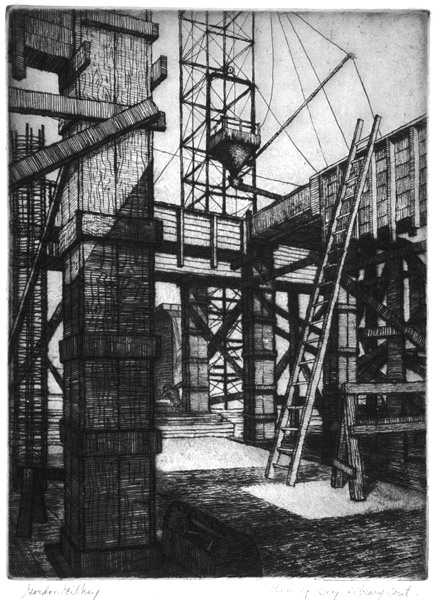 Gordon Waverly Gilkey was born March 10, 1912, near Scio, Oregon.  After first attending nearby Albany College, Gilkey entered the University of Oregon where his first interest in architecture gave way to the art of printmaking, inspired by Eyler Brown, architect and printmaker, and artist Maude Kerns.  In 1936, he was awarded the first MFA at the University of Oregon, with his thesis project being the documentation in engravings of the building of the new library.  Gilkey received WPA funding for his project.

After graduation, Gilkey moved to New York where his girlfriend and future wife, Vivian Malone, also from Albany and a UO graduate, studied violin at the Juilliard School.  In New York, he became the official artist of the New York World’s Fair and that work is documented in the book

After teaching at Stephens College in Columbia, Missouri, he entered military service in 1942 and strongly advocated for the preservation of art subject to destruction or confiscation.  Following the end of the war, Gilkey played a major role in finding art confiscated by the Nazis. For his efforts in saving art and building international art relationships, Gilkey received honors from several European countries and was awarded the Meritorius Service Medal by the United States. He was recognized as an Officer of the National Order of the Légion d'honneur by France in 1997.

In 1947, Gilkey became chairman of the art department at Oregon State University and from 1962 until his retirement in 1977, he was dean of OSU’s School of Humanities and Social Sciences which he developed into the College of Liberal Arts.  In 1964, he was appointed by then-Governor Mark Hatfield to establish the Oregon Arts Commission of which he was the first chair.

Following retirement from OSU, Gilkey served as curator of prints and drawings at the Portland Art Museum until his death. The collection was substantially enhanced by donations from Gilkey. The museum’s Vivian and Gordon Gilkey Center for the Graphic Arts was established in 1993.

Gordon Gilkey died in Portland, Oregon, on October 28, 2000,  at the age of 88. On February 1, 2016, U. S. Senator Ron Wyden posthumously honored Gordon Gilkey and Mark Sponenburgh with a Congressional Gold Medal for their work as part of the “Monuments Men” that tracked down  and retrieve thousands of works of art stolen by Nazis during World War II.