O. B. Dawson designed the Arnold Bennett Hall Memorial Gates. He may have been responsible for the design or fabrication of the interior and exterior doors in the entrance halls although there is no primary source to verify this. 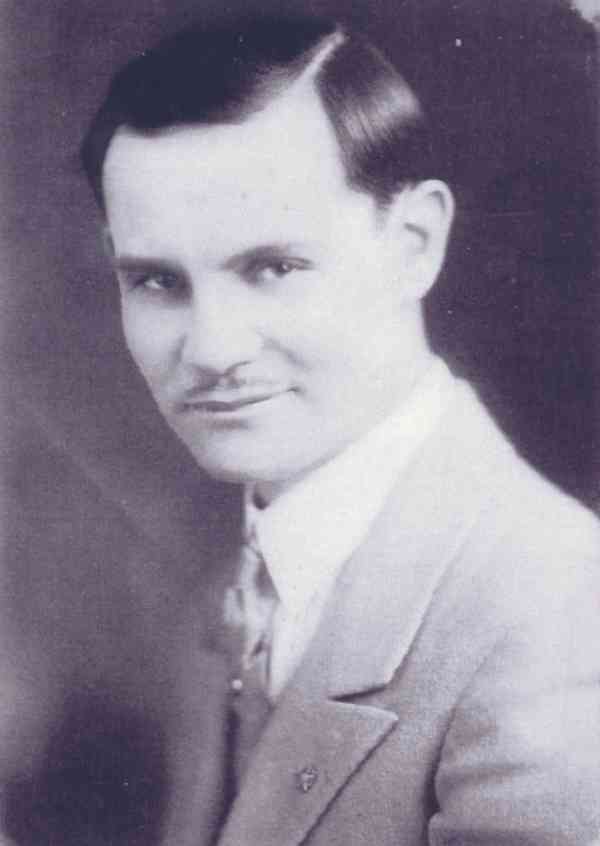 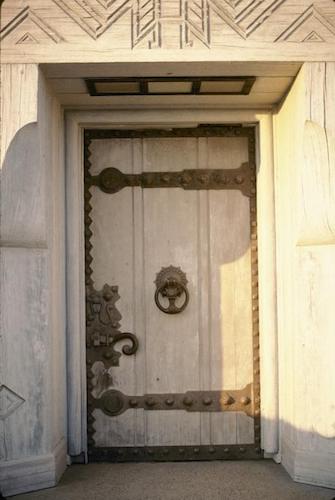 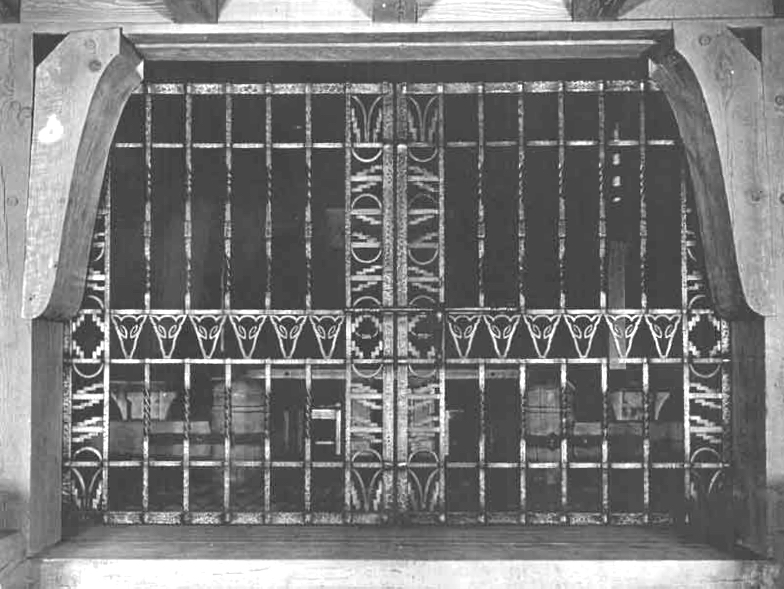 Orion Benjamin Dawson was born on May 12, 1896 in Arkadelphia, Arkansas. By 1910, his family was living in Oregon, and Dawson was attending high school in Portland when the family moved to Los Angeles.  In Los Angeles, Dawson attended the Los Angeles Polytechnic High School at night while working as an apprentice blacksmith during the day.  According to Dawson, he also studied music, and performed with the Los Angeles Opera.  At the time he entered service in World War I in 1917, Dawson was employed by Killefer Manufacturing Company, founded by blacksmith John Killifer, a firm which would later be sold to the John Deere Company.  During his two-year service in World War I, Dawson was stationed in France for several months where he noted the medieval ironwork in that country and received some instruction from a local blacksmith about making wrought iron decorative gates.

When Dawson’s military service ended in 1919, he worked odd jobs related to forging iron in Portland and other sites until 1922 when he moved to Los Angeles.  There, Dawson found employment creating ornamental ironwork and studied design in night classes. In 1926 he moved back to Oregon and took art and music classes at the University of Oregon. At UO, he also was a member of the Men’s Glee Club (Oregana, 1926), reflecting his longstanding interest in music.  His wife, Alice Friend Dawson (1908-1981) taught violin.  Returning to Portland, Dawson established his own shop and faced with much competition marketed himself directly to architects and found inspiration in the designs of famed Philadelphia ironwork designers, Samuel Yellin (1885-1940).

Dawson was one of 115 artisans from Oregon employed in the Public Works Art Program which existed from December 8, 1933 to June 30, 1934. The PWAP was followed by the Federal Art Project (FAP) of the Works Progress Administration. In December 1935, Burt Barker, state director of the FAP appointed him as a supervisor, a selection suggesting his that skill was highly respected. Oregon’s most prominent metal designer, Johan Konrad Tuerck (1864-1946), who designed the Museum of Art’s bronze doors in 1929, had retired from practice.  Over the next four years, Dawson supervised the design and execution of decorative ironwork for the University of Oregon, Oregon State University, and Timberline Lodge.

The ironwork projects for the University of Oregon were Dawson’s first WPA jobs.  Two projects were discussed in December 1935, both memorial gates:  one work honored World War I servicemen and was to be located outside at Howe Field; the other work, for the new library, memorialized Arnold Bennett Hall, a former university president who died in 1936 while the building was being constructed. The library project started on December 18, 1935, and involved designing and constructing three wrought iron gates as a memorial to Hall to be placed in openings in a principal corridor in the new library. Two plaques honoring Hall were also created and placed near the gates.  To fill WPA relief quotas, nine laborers were hired to assist Dawson. The work was completed by May 31, 1936.

While Dawson and his team worked on the UO gates they concurrently constructed several ironwork items for Oregon State University including a magnificent gate, most of which has disappeared.  The work for OSU was proposed by Dawson as a means to keep occupied the blacksmith crew he was required to employ. Substantial work for Dawson and his team would come later; in fact Dawson would need more laborers to undertook what would be his masterwork, the wrought ironwork for a new hotel on Mt. Hood.  In early 1936, Dawson was selected by the architects to supervise the building’s ironwork the building and in August 1936 he and his crew began work on Timberline Lodge.  Almost all of the work at Timberline Lodge was completed in time for President Roosevelt’s visit on September 28, 1937 for the hotel’s dedication ceremony.

After his WPA employment, Dawson worked for Willamette Iron and Steel Company and as an independent contractor.

Force, Rachel Gwen. Blacksmith : The Significance and Preservation of O.B. Dawson's Ironwork for the WPA. Thesis, University of Oregon, 2004.

Knudsen, Reinhard. "Labors With Wrought Iron To Make a Living And Sings at his Work." Oregon Sunday Journal, December 11, 1938.