A guide to library resources on women composers, conductors, and performers. 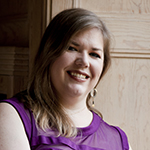