Read the accompanying essays by Matthew Desmond, Mehrsa Baradran, Trymaine Lee, and Tiya Miles in The 1619 Project to better understand the violent theft that was slavery and how it echoes in the brutality of American capitalism today:

Slave Voyages is a digital memorial to the people who were enslaved and trafficked to the Americas in the Trans-Atlantic slave trade. This trade is an example of White settler colonial capitalism.

Warning: This site's content can be both emotionally disturbing as well as a powerful tool to create understanding and empathy. For example, watching the Timelapse data visualization of ships moving from Africa across the Atlantic Ocean can be overwhelming for viewers.

The project was created by the Emory Center for Digital Scholarship. More from the website:

"The Trans-Atlantic and Intra-American slave trade databases are the culmination of several decades of independent and collaborative research by scholars drawing upon data in libraries and archives around the Atlantic world. The new Voyages website itself is the product of three years of development by a multi-disciplinary team of historians, librarians, curriculum specialists, cartographers, computer programmers, and web designers, in consultation with scholars of the slave trade from universities in Europe, Africa, South America, and North America. The National Endowment for the Humanities was the principal sponsor of this work carried out at Emory Center for Digital Scholarship, the University of California at Irvine, and the University of California at Santa Cruz. The Hutchins Center of Harvard University has also provided support."

The 1619 project builds on recent scholarly research documenting the ways that slavery helped create the brutality of capitalism in the US today. These books identify "slavery as the primary force driving key innovations in entrepreneurship, finance, accounting, management, and political economy that are too often attributed to the so-called free market. Approaching the study of slavery as the originating catalyst for the Industrial Revolution and modern capitalism casts new light on American credit markets, practices of offshore investment, and understandings of human capital. Rather than seeing slavery as outside the institutional structures of capitalism, [these books] recover slavery's importance to the American economic past and prompt enduring questions about the relationship of market freedom to human freedom" (quote from blurb to Slavery's Capitalism).

Voices of Those who Survived Slavery 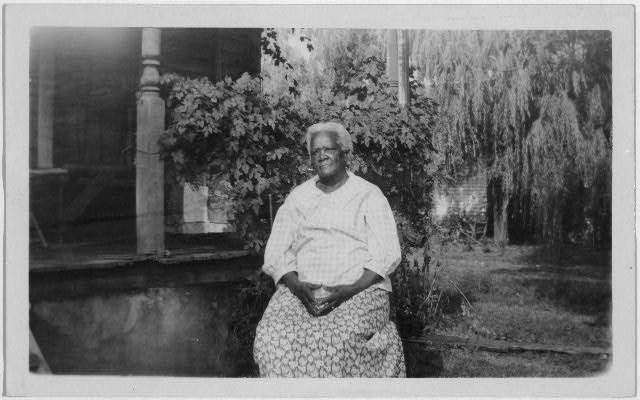 This photo is from the Portraits of African American formerly enslaved people from the U.S. Works Progress Administration, Federal Writers' Project slave narratives collections. For more photographs and manuscripts, click the first link below.

Redlining is the systematic denial of services (often financial services) to residents of Black neighborhoods. Specifically, it refers to maps drawn in the 1930s by a government-sponsored corporation that "'graded' neighborhoods ... based in large part on their racial makeup. Neighborhoods with minority occupants were marked in red — hence 'redlining' — and considered high-risk for mortgage lenders" (OPB). As a result, banks denied mortgages to people of color in these neighborhoods, or targeted them for contract leasing and other predatory lending practices. Ta-Nehisi Coates documents these practices and makes the argument that the many still-living people whose homes were stolen from them under discriminatory lending practices deserve reparations in his essay, "The Case for Reparations."

Related practices persist to this day. For example, during the early 2000s, African Americans and other people of color were offered loans on worse terms than they would have otherwise qualified for. As a result, a large portion of Black wealth was destroyed during the Great Recession of the late 2000s. These and related practices continue to drive down home values in Black neighborhoods. Below is some additional information on these practices. While little research has been done on redlining in Eugene, you can read more about redlining and other racist housing practices in Portland, Oregon and across the country. You can start by looking up the redlining map for Portland, or for a city near you:

Learn more about redlining from this episode of Black History for White People:

Resources from the Podcast's Show Notes

According to the University of Virginia digital project site, the "racial dot map is an American snapshot; it provides an accessible visualization of geographic distribution, population density, and racial diversity of the American people in every neighborhood in the entire country. The map displays 308,745,538 dots, one for each person residing in the United States at the location they were counted during the 2010 Census. Each dot is color-coded by the individual’s race and ethnicity. The map is presented in both black and white and full color versions. In the color version, each dot is color-coded by race."

Learn more about the history and contemporary legacy of redlining

In the early '70s in Eugene, the Afro-American Institute provided many services including referral services for employment and housing. You can make an appointment to view the organization's records here: