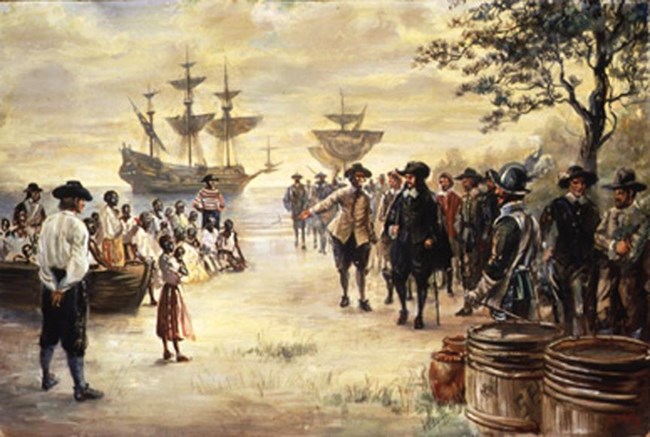 Painting of the arrival of the first Africans arriving in Virginia, by Sydney King. From National Park Service.

Nikole Hannah-Jones opens her podcast at the shore, wondering what it was like for the Africans who were brought to Virginia in August, 1619. If you're curious to learn more about the African people who arrived in Virginia in 1619 on the White Lion, an English privateer, and what became of them, here are a few good sources:

Scholarly Articles on this Topic

Explore in more depth. The following two articles require you to login with your Duck ID or be signed into the campus VPN.

According to a letter by the tobacco planter John Rolfe, the widower of Pocahontas, a ship landed in England’s 12-year-old Jamestown settlement and “brought not anything but 20, and odd, Negroes, which the Governor and the Cape Merchant bought for victuals’’ – provisions. (From USA Today).

Slavery and the new Republic

We learn in the podcast that in Thomas Jefferson's rough draft of the Declaration of Independence, he included slavery as an evil, blaming it on the "king of Great Britain." Read his original text.

There were free, Black abolitionists even at the time of the early Republic. One of them was Benjamin Banneker, a completely self-taught mathematical genius who achieved professional status in astronomy, navigation, and engineering. His acknowledged expertise and superior surveying skills let to his role as coworker with the Founding Fathers in planning Washington, DC. His annual Banneker's Almanac was the first written by an African American and outsold the major competition. Banneker enclosed a letter to Jefferson with a copy of his almanac, using Jefferson's own words against him to argue (in polite 18th century terms) against slavery. Jefferson sent this reply.

David Walker was an African American abolitionist and writer born in 1796. His "Appeal" was loosely modeled on the U.S. Constitution and has been called "a radical anti-slavery and anti-racism manifesto." "Nothing like it had been published before. It remained a rallying point for African Americans for many years after Walker's death. And it informed the thinking of generations of Black leaders, including Frederick Douglass, W.E.B. Du Bois, Martin Luther King, and Malcolm X."

The Civil War, Lincoln, and the Black Emigration Plan

Lincoln and the Black Emigration Plan

Nikole Hannah-Jones talks about the 1862 meeting Lincoln had with 5 prominent members of the D.C. Black community, in which Lincoln stated that "you and we are separate races" and that it would be better for both if they were separated. Below you can see an account of that meeting from the Black perspective at that time.

There was a whole organization in the U.S. at that time devoted to resettling free African Americans to some other part of the world: the American Colonization Society. The U.S. House put forward a resolution with this report: Report of the Select Committee on Emancipation and Colonization with an Appendix. Many free Black Americans were opposed to this idea, Frederick Douglass (quite vehemently) among them. But there were also those who saw it as their best alternative. Here is a "Memorial" or petition from a group of them to Congress:

Reconstruction and the Great Nadir 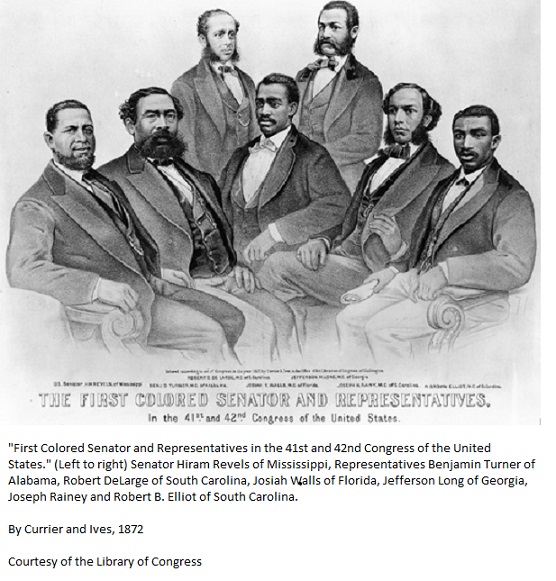 You can find more information on these remarkable men from the US House History website.

The period after Reconstruction to the early 20th century is called the Great Nadir. A nadir is a low point, and this period was defined by very bad race relations in the US.

Reconstruction effectively ended in 1877 and the Jim Crow era began. Despite the hideousness and violence of the White terrorism imposed on Blacks in the South, there were Black voices that mounted a resistance. Below are a few of the important figures of this era and their works.

"W. E. B. Du Bois was a public intellectual, sociologist, and activist on behalf of the African American community. He profoundly shaped black political culture in the United States through his founding role in the NAACP, as well as internationally through the Pan-African movement."

Booker T. Washington rose from slavery to a position of power and influence, becoming one of the most important African-American leaders of his time. He built the Tuskegee institute into a major African-American presence and place of learning. Although Booker T. Washington encountered some criticism from other Black leaders for accommodating segregation, his accomplishments were remarkable and he devoted his life to improving the lives of African Americans.

Ida B. Wells was a journalist, editor, and  a courageous and tireless anti-lynching activist. She also worked for woman suffrage and social reforms. 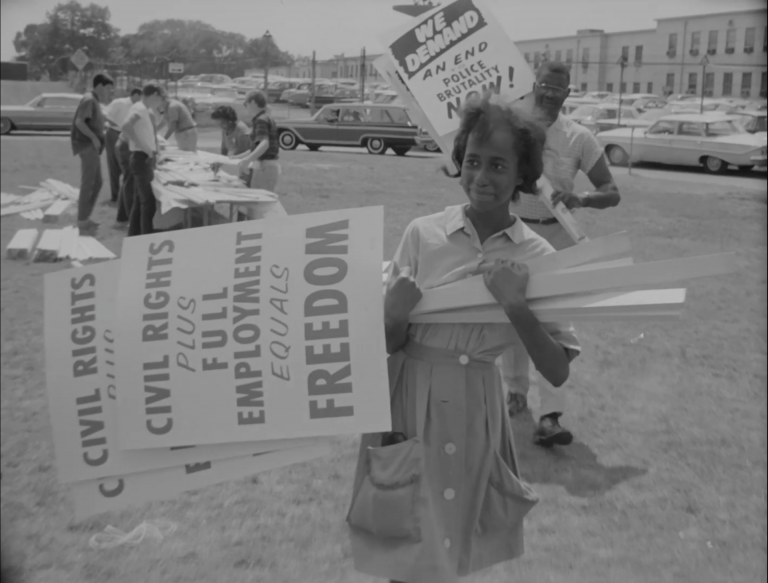 According to The Washington Post, "Historian Carol Anderson traces the evolution of voter suppression tactics, from poll taxes and literacy tests instituted after the passage of the 15th Amendment to the rise of strict voter ID laws and poll closures after the election of America’s first Black president. Anderson is a professor of African American Studies at Emory University and author of White Rage and One Person, No Vote: How Voter Suppression is Destroying Our Democracy."